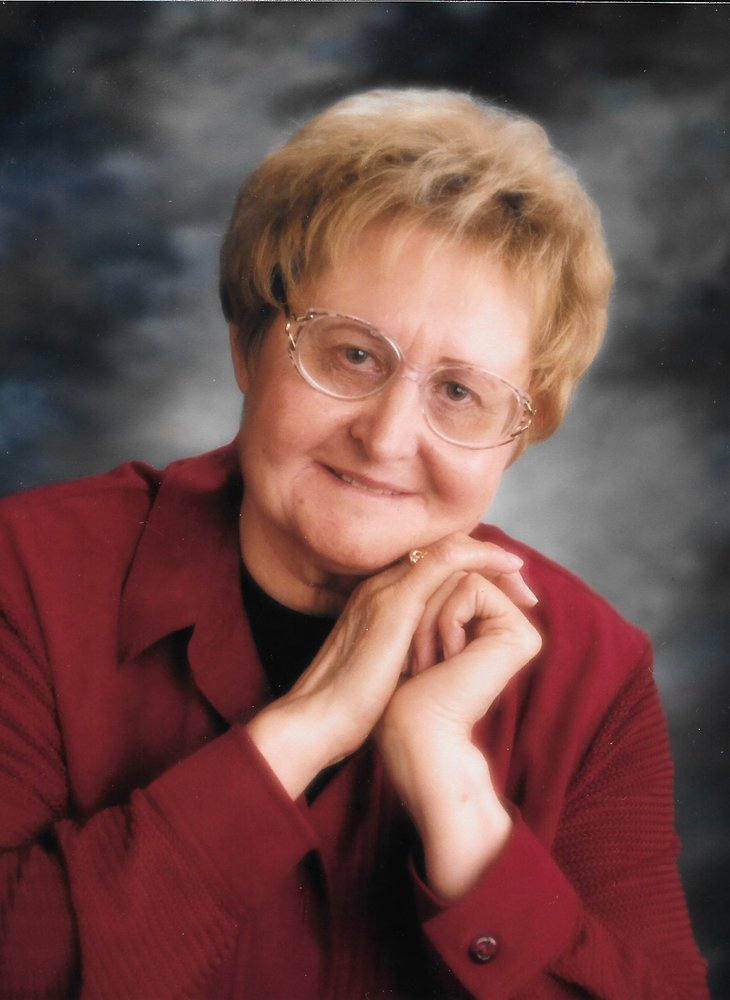 Please share a memory of Rose to include in a keepsake book for family and friends.
View Tribute Book
Rose Marie Bos was born on October 27, 1932 to Paul and Blanche Williams of Strome, Alberta. She was the second child of five—Joseph, George, Jack, and Louise. She enjoyed her early life on the farm and often drew on these experiences throughout her life as she wrote both prose and poetry, created many paintings, and produced other works of art. The chores, animals, and her family filled her early days. She often recalled trips in the cutter or bareback rides to the small country schoolhouse named Amity which was only a short distance northwest. The Williams family was very musical. They spent much time together singing and this followed throughout her life as she would later sing with her sister for church meetings, hospitals, and with the Christian Cowboys group. Cowboys were an important part of her youth for she loved the stories of Roy Rogers and Gene Autry. She wasn’t just a spectator but she had a beautiful horse named Silver that she loved to ride. Despite her love for the farm, there was an area that still was empty for her. She had an intense desire to know God but wasn’t sure about how to find Him. She listened to radio broadcasts from Theodore Epp of “Back to the Bible” and Oral Roberts; then bought a Bible and began to read it but she still couldn’t connect with Him. Various family pressures combined with a fear of the unknown led her to Edmonton where she began training to become a Certified Nursing Aide. This was at a veteran’s hospital that later became known as the U of A. Feeling alone and desperate she went to Strathcona Baptist Church and sat through an evening service. Speaking with Pastor Edwards after, she found the God that she had been searching for through believing in the Lord Jesus Christ. May 18, 1958 was always referred to as her spiritual birthday. Enjoying her work in the veteran’s hospital, she met a special patient named George Bos who had sustained a severe hand injury. The accident had a hidden blessing, that of their marriage on March 10, 1962 An only child, Wayne, was born on December 20, 1963 in Wetaskiwin. Rose Marie would become a dedicated parent, focusing much of her life on him. In 1966 the family moved to the north side of Killam where they started an auto body business. The business grew into an auto wrecking and tow truck service with an eventual dealership in Argo all-terrain vehicles. The pair became active in the town and what wasn’t there they began. The Killam Ski Club, the Snowmobile Club, the Gun Club, and the Flying Club were all part of their pursuits. Rose Marie became a trophy-winning trap shooter, using a 12-gauge shotgun, among other firearms. The pair were avid fishermen and curlers. They lived a full life. Rose Marie was even practicing flying when things changed radically. On December 8, 1983, a typical call for assistance came and George went out to help. After starting a stalled vehicle, a delivery van struck George and another man, ending their lives swiftly. Rose Marie and her 19-year-old son, Wayne, supported each other through the difficult days to follow. Eventually, the business was sold and they moved to Sedgewick. God took the mother and son in a different direction with a more spiritual focus than before. Rose Marie became the secretary for the Baptist church, and Wayne was led to Prairie Bible College. Rose Marie served as Killam Baptist Church secretary for eighteen years. She continued with writing, drawing, oil painting, and calligraphy-which she used often with church certificates, documents, and posters. As she aged, she realized that she must downsize. She moved to Providence Place in 2005 and celebrated her 85th birthday while living here. Eventually, she moved to Red Deer where she could be close to her son and his wife, Lois. Dementia was a major concern, but she continued to have a quiet and faithful witness to God’s grace even in the hard and final days of that disease. A fractured hip proved to be more than she could recover from and she slipped into eternity at The Hamlets on Saturday, August 22 of 2020. She will be missed, but fondly remembered. The Jesus that she first met in 1958 has now taken her home. We would not wish her back to this world of pain. Memorial Donations may be given to Killam Baptist Church or Providence Place in Daysland, AB, or your charity of choice. A funeral service will be held at the Killam Baptist Church on Monday, August 31, 2020 at 2:00 p.m. Due to the COVID-19 restrictions, we are limited to the number of people that may attend the service and therefore registration is required. To registration please call Fee & Sons Funeral Home (780-385-3642).

Share Your Memory of
Rose
Upload Your Memory View All Memories
Be the first to upload a memory!
Share A Memory