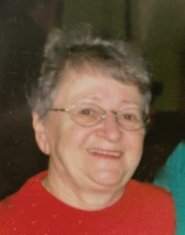 Please share a memory of Phyllis to include in a keepsake book for family and friends.
View Tribute Book
Phyllis Elaine Yarham was born to Samul and Marie Sprecher on June 26, 1941 and passed away peacefully in Killam Health Care Centre on August 3, 2020 at the age of 79 with her loving husband James and her son Rick at her side. Phyllis was born in Rimbey and grew up at Alliance. There she met and married her life partner, James, in 1957 and they started their family together shortly after. Their eldest son Glen was born in 1958 and Ricky in 1960. They then moved to the Strome area in April of 1963 and 1964 their last child, Shanna, arrived. They found their forever home in the spring of 1966, which is the current family farm. Phyllis was more than just a farm wife. She was a loving wife and best friend to James, a mother to Glen, Rick and Shanna, grandmother to Brittany, Andrew, Brett, Brandon, Camron, Dawson, and Dusty and a great grandmother to Amelia. Phyllis was also a wonderful gardener, a cake decorator, an accomplished seamstress, crocheter, knitter, cook, baker and so much more. She made farm life and family her priority. Her life was full and busy. Reaping and processing the garden produce every summer was a priority, annual spring and fall cleaning, those “chicken days” with friends and family. Winter was her time for those sewing, knitting and crafting projects, or maybe reading a good book or two. Her door was always open, meals prepared quickly and efficiently, welcoming one and all with open arms and plenty of food and laughter. She willingly lent a sympathetic ear to anyone who needed to be heard or an unbiased perspective. Never one to mince words though, Grandma was sure to let you know where you stood with her - good or bad. She wasn’t a pushover either. Be sure “dynamite comes in small packages”. She is survived by her loving husband of 62 years, James, son Glen and his stepson Dusty, son Rick (Janet) and their children Brittany, Andrew, and Brett (Tatiana) and great grandma’s little peanut - Amelia Yarham, daughter Shanna (Frank) These, their children Brandon (Brooke), Camron (Britt), and Dawson, brother Lorne (Hazel) sisters-in-law Ann Sprecher, Alice Fuller, Joyce Yarham and Connie White as well as a host of special nieces and nephews, friends and neighbours. Phyllis was predeceased by her parents Samul and Marie, siblings Ruby Cole, twin sister Faye Dembicki, brothers Bob, John, Walter, Dick, father-in-law Robey Yarham, sisters-in-law Gloria, Donna, Nora Sprecher, and brothers-in-law Milton Cole, Ed Dembicki, Doug Fuller and Bill Yarham. A light in our lives has gone out but still shines in our hearts. Due to current restrictions, a private family graveside service will be held on August 11, 2020. Memorial donations are gratefully accepted to STARS Air Ambulance or a charity of the donor's choice.

Share Your Memory of
Phyllis
Upload Your Memory View All Memories
Be the first to upload a memory!
Share A Memory