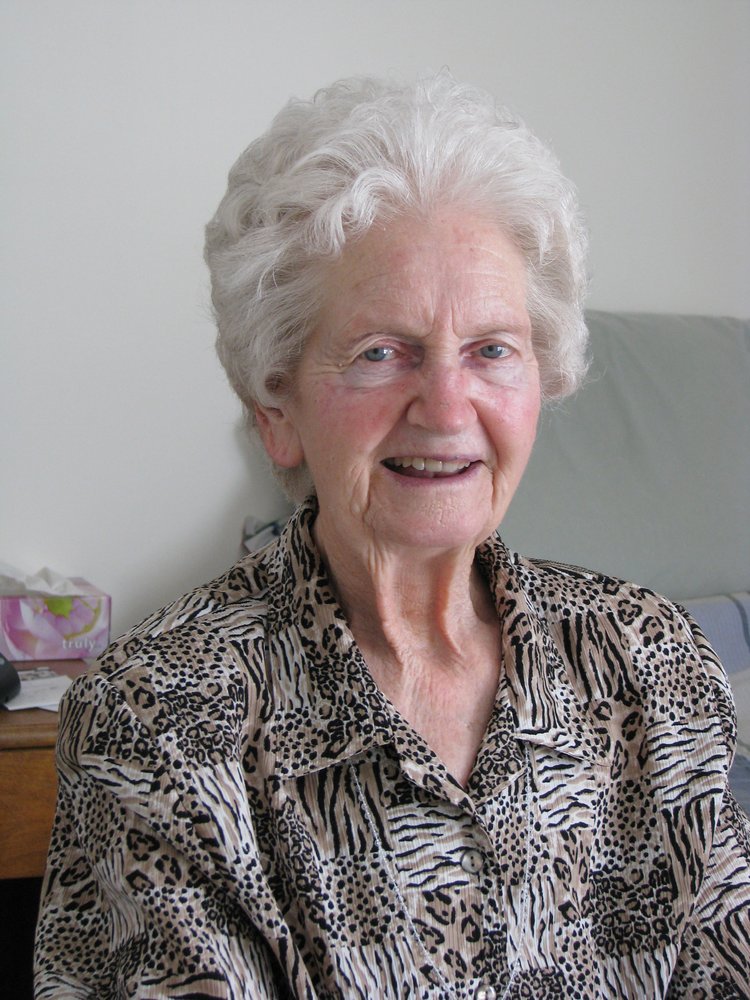 Please share a memory of Mary to include in a keepsake book for family and friends.
View Tribute Book
Mary McNabb, daughter of Robert and Ida Borrowman was born April 2, 1935 in Heisler, Alberta. She passed away on April 22, 2020 at the age of 85. She married Hugh McNabb on July 4, 1952. They started their family while living in Forestburg, she as a homemaker and Hugh working various jobs. An opportunity to farm presented itself and they moved their young family to a farm west of town. This was their home until Mary moved off the farm a few years after Hugh’s passing. She lived in Camrose for a short time then moved to Providence Place in Daysland. Failing health forced her to move to Killam where she resided until her passing. Mary began her role as a caregiver at a very young age helping raise two younger brothers while caring for her terminally ill mother. When in her teens she worked as a counter server in the Forestburg drugstore. Mary was a woman who enjoyed the quiet country life. As at any farm, her door was always open, you were welcome anytime. She worked hard all her life doing what needed to be done. People and nature were more important to her than possessions or appearances. Material things didn’t hold value-what truly mattered was what lay within the heart and spirit of a person. Most leisure activities or hobbies didn’t interest her, she viewed her time outdoors as time well spent. Her family and farm work was the most important activities in her life. Preferring the outdoor jobs to the indoor ones, she gave clear instructions to the children as to tasks to be done while she was elsewhere. Being outside doing farm duties filled her days and gave her pleasure. Many bottle-fed calves were recipients of Mary’s tender care. One by one, her grandchildren began to appear. Each new arrival had a unique place in her heart. She created a special relationship with each, recognizing them for the individuals they were. Each grandchild was equal and treasured. Many days now included a little one to explore the farm with or some hours in the house enjoying their creativity in play, or together with a book, maybe sharing a Wagon Wheel or cookies with a glass of the best Kool-Aid ever. When great-grandchildren arrived Mary enjoyed their visits when she was able to. Mary was more comfortable listening rather than talking. Her ability to listen to the message within spoken words, having the ability to know how you were feeling, made her a treasured confidant, someone safe and solid to her family. She knew what to say or do to make you feel valued. Mornings were another favorite. Sunrises were to be appreciated, a cherished bit of peace and quiet before the work began. Then you started the day’s work, taking whatever came your way. Hopefully, at sundown, it was time to stop. Mary enjoyed the country drives in the early evening sometimes stopping to see grandkids. Occasionally the day ended with a treat of Chinese food if the restaurant was still open. She and Vi continued this treat when they were both alone. Mary liked to be home before dark and she thought you should be too, saying often to her family, “You better get going, it’s almost dark”. Mary was always more comfortable as a caregiver than a receiver preferring to do for others than for herself. She always felt someone needed something more than she did. Due to her health, the majority of the past few years were confined indoors, she missed the peaceful drives in the country and being outside. Her last day here with us started with a beautiful sunrise and she left us to be home before dark. Mary leaves to cherish her memory her children Keith (Debra) McNabb, Carol (Wade) Meyer, Donna (Duane) Lang, Dale (Barb) McNabb, Jim McNabb, Barbara (Randy) Roth; grandchildren Lori (Brendan) Lunty, Kaylyn (Conor) Lunty, Travis (Renee) Meyer, Tyler Meyer, Shane (Nadine) Lang, Dallas (Vickie) Lang, Terese McNabb and step-grandsons Nathan, Steven, and Gavin McGillivray, Robin (Chris) Ford, Joshua, Riley, Cameron, Shayla, and Kira McNabb, Melissa, Ryan, and Alex Roth; great-grandchildren Julie and Marielle Lunty, Troy Lunty, Jasmine and Jacob Meyer, Curtis, Brody, and Ashley Lang, Cameron, Shelby, and Austen Lang, Cassius Ford; sisters-in-law Stanze Jacobs, Violet McNabb, Hazel (Wayne) Grant; brothers-in-law Archie (Elaine) McNabb, Ralph (Anne) McNabb, Merle (June) McNabb and numerous nieces and nephews. Mary was predeceased by her husband Hugh; parents Robert and Ida Borrowman; brothers Andrew, Douglas, Robert; great-grandson Chase Lang; sisters-in-law Mildred Shanks, Hazel McNabb, Irene McNabb, Jean Burma; brothers-in-law Douglas Shanks, Robert McNabb, Gordon McNabb, Fred McNabb, Carl Burma. Due to the COVID-19 pandemic, no public service will be held. A private family gathering will take place at a later date. In lieu of flowers, donations can be made to the Stollery Children’s Hospital, STARS, Alberta Heart & Stroke, Alberta Cancer Society, or a charity of the donor’s choice.

Share Your Memory of
Mary
Upload Your Memory View All Memories
Be the first to upload a memory!
Share A Memory