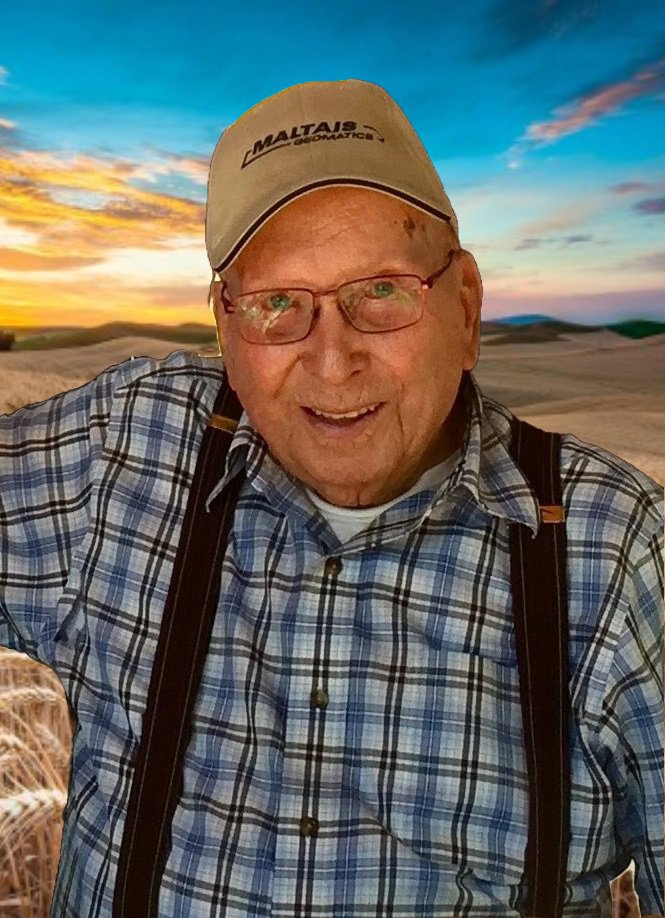 Please share a memory of Ernest to include in a keepsake book for family and friends.
View Tribute Book
Ernest (Ernie) Renshaw Cookson was born on July 20, 1923 on the family farm and passed away peacefully March 7, 2020 at the Viking Extendicare at the age of 96 years. Ernie was the eldest child of Thomas and Elsie Cookson. Ernie grew up on the family farm and joined the Royal Canadian Air Force in November 1942. After completing his training in August 1943, he was posted overseas and served as a rear gunner. He was awarded several medals of service. Ernie returned home to the family farm in February 1945 and married Vesta Coughlin on June 14, 1946. Following their marriage, Ernie and Vesta lived on the CPR homestead of his grandparents the Renshaw’s and raised their family of 4 boys. The family farm was very important to Ernie and he took pride in his crops and yard. Following the death of Vesta, Ernie remained on the farm where he actively farmed until the fall of 2008 at the age of 85 years. Ernie married Eunice Losness on February 14, 2009 and moved into Lougheed. When Ernie moved to town he became the unofficial grass mower of the town of Lougheed. He was a charter and life member of the Lougheed Legion, and an active member of the Lougheed Agricultural Society. In his spare time, he enjoyed curling, dancing, spending time with neighbors and friends, and following his boys around to their sporting events. Ernie is survived by his loving wife Eunice and his four sons; Ron, Tom (Linda), Blair (Jackie), Scott (Barb), stepdaughter Denise (Morris), 13 grandchildren, 8 great-grandchildren, brother Donald and sister Rosemary, as well as numerous nieces and nephews. He was predeceased by his late wife Vesta in 2004. A funeral service will be held at the Lougheed Community Hall on Thursday, March 12, 2020 at 2:00 p.m. Memorial donations may be made to the Legion Branch 180, the Viking Extendicare or a charity of the donor's choice.

Share Your Memory of
Ernest
Upload Your Memory View All Memories
Be the first to upload a memory!
Share A Memory