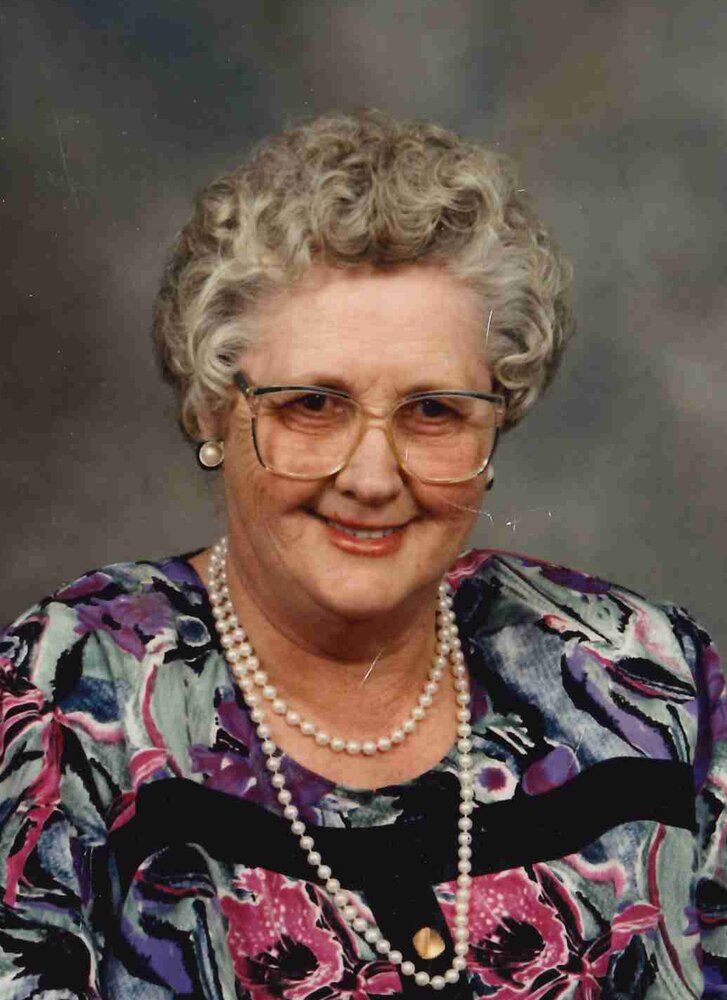 Please share a memory of Ruth to include in a keepsake book for family and friends.
View Tribute Book

Ruth Evangeline Peterson passed away peacefully into the presence of her Lord at the Killam Health Care Center on November 11th, 2022 at the age of 93 with her son Dennis at her side. She was born to Andrew and Mary Sorensen on October 10th, 1929 and delivered by her Grandma Sorensen in their farm house, 2 miles south and 2 miles east of Killam. Ruth was the youngest of seven children. Ruth grew up in a strong Christian home and at a very young age, put her trust in Jesus as her Lord and Saviour. Summer Bible Camp was a love of the Sorensen family and this is where Ruth was baptized as a young lady. This affection for camp continued through her adult years and Dennis made sure she got to Veteran Full Gospel camp right up until 2018.

Ruth attended Prairie Park School several miles from her home. In those days she rode to school on horseback, buggy or sled. As a young woman, she worked as a housekeeper in Vancouver and Killam until her children were born. Ruth attended Canadian Northwest Bible Institute in Edmonton where she met her future husband Bob Peterson at a local church. Bob built up the courage to take her for coffee and after about a year of dating, they were married on May 31st, 1958 at the Killam Pentecostal Tabernacle. God blessed them with 2 children. Janice was born in 1961 and Dennis was born in 1969. Ruth had her share of heartache, and none greater than when Janice passed away tragically at the end of August in 1969 in a bicycle accident. She has shared her story about Janice to many, right up until her passing. Ruth phoned her mom shortly after, and Grandma Sorensen’s first response was, “Ruth, she’s at home with Jesus.” Dennis was born about 2 months later and quickly became Bob and Ruth’s pride and joy. Dennis as a young boy delivered newspapers and often Ruth would be helping him. Dennis loved to sing and Ruth was his greatest fan.

Bob and Ruth loved to travel and some of their destinations included Detroit, Nebraska, Vancouver, Irvine CA, and Victoria. They also enjoyed many trips to Vermilion to visit her brother and his family. In May of 1986, Ruth experienced more heartache when her husband Bob suddenly passed away at the age of 55. Following Bob’s death, she relied a lot on her brother Ralph and soon after, her sister Esther moved back to Killam. Esther and Ruth were what we would now call gamers. SkipBo being the favourite along with Rook and Uno. They went for lots of drives in the country. They both loved their pets and on one afternoon drive, they were disposing their cat litter in the country. As Ruth was emptying it in the ditch, she fell and rolled down the grade. Esther went to help, Ruth held out her hand and pulled Esther in as well. While both ladies were down and unable to get up, along came a local Pastor and was successful in extracting these 2 sisters.

Ruth loved her church and was a long-time member of Killam Baptist Church. Up until a few weeks ago, Dennis or another family member would wheel her to church. She was always up to go when offered a ride. Ruth was a lover of routine and daily phoned family and friends at regular times.

Ruth was a trouper, pulling through multiple surgeries and having numerous replacement parts. It got to the point where she was falling a lot in her home and needed to move to LTC. She had dreaded going there, but once she settled in, she loved it. She enjoyed all the recreation activities, the church services, and getting her hair done weekly. Ruth made many new friends with residents and staff. She was loved by the staff and we as a family have received numerous calls and messages along those lines. One of the messages from a staff member stated, “I will forever remember Ruth and all her stories. Ruthy has deeply touched my life, taught me so much, and I will never forget her.” Dennis was faithful in visiting his mom and they loved to play SkipBo together. In her last few hours while family was FaceTiming with her, she smiled as Dennis sang “Blessed Assurance”. She confirmed her faith in Jesus and was looking forward to her heavenly home.

Ruth was predeceased by her daughter Janice and her loving husband Bob, her parents, Andrew and Mary Sorensen, her siblings, Chester, Esther (Bob), Hartley (Alice), Amy (Harold), Roy (Dorothy) and Ralph. She will be missed by her son Dennis and sister-in-law Jean Sorenson along with numerous nephews and nieces.