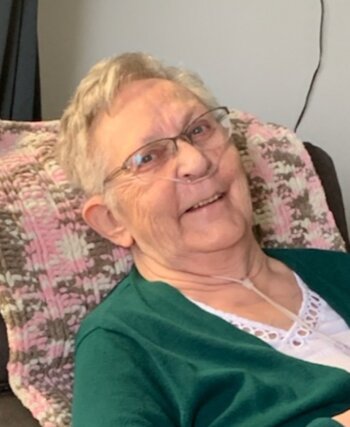 Please share a memory of Muriel to include in a keepsake book for family and friends.
View Tribute Book

Muriel Ziesel (nee Froehler) died September 15th, 2022 at the Extendicare Facility in Viking Alberta, at 85 years of age. She was born on March 19th, 1937 in Heisler, Alberta.

Muriel married young and resided with her husband, Albert Ziesel, on a farm south of Strome. She and Albert raised 6 children before retiring to Daysland, where he still lives. They were married for 66 years.

Muriel had the soul of an artist, expressing her creativity through painting, baking, sewing, flower gardening and setting puzzles. She was a chocolate lover and never let a day pass without a taste or two, or three! Dear to her heart was her role as a grandmother. She helped each of her 10 grandchildren and numerous great grandchildren feel seen, heard and special. They were her Angels.

Though not religious, Muriel was a spiritual person and believed she would return to a loving source where she could watch over all those she cared for. She spent her life learning, growing and healing from childhood trauma. She was an inspiration to her children. As per her request, no funeral service will be held.

“Do not think of me as gone. I am with you still in each new dawn.”

Share Your Memory of
Muriel
Upload Your Memory View All Memories
Be the first to upload a memory!
Share A Memory