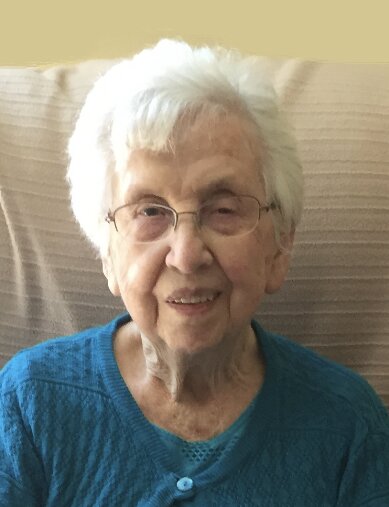 Please share a memory of Helen to include in a keepsake book for family and friends.
View Tribute Book
Helen Elizabeth May Mayne passed away peacefully on Thursday June 9, 2022 at the LTC in Killam, Alberta at the age of 92. She will be lovingly remembered and sadly missed by her daughter Sherry Mayne and son Doyle Mayne. Four grandchildren Michelle (Gerald) of Calgary, Stephanie of Blackfalds, Bradley of Chilliwack BC, Cody (Farron) of Rocky Mountain House. Eight great- grandchildren Landyn, Tanner, Alexa, Amelia, Kiera, Kenzie, Olivia. One brother in- law Everett Mayne (Anita) and numerous nieces and nephews. Helen was predeceased by her husband Frankie Mayne (June 15, 2002) and son Lonnie Mayne (March 26, 2010). Parents Robert and Elizabeth Meakins and siblings Clarence, Viola, Clifford, Claude, Norman. Helen was born on March 8, 1930 in a blizzard on the family farm north of Jarrow, Alberta. She attended school in Jarrow and enjoyed helping out on the family farm where they had numerous animals, such as sheep and cattle. Before being married she worked for a short while at the Viking hospital. Helen married Frankie Mayne June 19th, 1950 and they lived on a farm south of Jarrow, later moving to a farm south of Kinsella where the children were born. First came daughter Sherry followed by twin boys Lonnie and Doyle two years later. Being a mother and raising her children was her pride and joy. Helen and Frankie then decided to leave the farm and move the family to Sedgewick in 1959. Helen’s greatest happiness came from watching her children grow, then her grandchildren and her great grandchildren. Her role as a homemaker allowed for her to be able to care for her grandchildren as well as open her home to other children. If you ask the grandchildren, they will tell you grandma’s house was the best! Always filled with love, acceptance and delicious cooking. Her gentle kind nature allowed for much fun and games. Nobody got in trouble at Grandma’s! She enjoyed baking, especially what the grandkids requested and in particular “Grandma buns”. She enjoyed sewing and made many items of clothing for the children when they were young. Gardening was also a favourite pastime, she enjoyed canning her fresh fruits and vegetables. Her pickled carrots were a family favourite! Helen and Frankie enjoyed going on many bus tours, camping, and road trips with friends and family across Canada and the United States. One of her fondest memories was when they took all the children and grandchildren to Disneyworld to celebrate Frankie’s retirement. Helen had a great love of old-time dance music and enjoyed going to dances from a young age with her family and into her later years with Frankie. She also loved to listen to the Storbakken’s play. In her senior years she enjoyed floor curling and attended many bonspiels. Many floor curling games were played and replayed over coffee with friends. She also spent her time playing cards, visiting friends and family and countless games of scrabble at the kitchen table. Helen was a loving, kind, gentle person with a quick wit and great sense of humour. She will be forever remembered in our hearts. Funeral services were held on June 13th at the Sedgewick United Church with Susan Mackinnon officiating. Gail Eckstrand played the piano for the congregational hymns “In the Garden” and “The Sweet By and By”. The eulogy and poem “You Only Have One Grandmother” was presented by Susan. Interment was at the Sedgewick Cemetery prior to the church service. Card of Thanks We wish to express our sincere thanks and appreciation for the acts of kindness shown to us as a family from relatives, friends and neighbours. Our thanks go out to Susan Mackinnon for officiating the service, Gail Eckstrand for playing the piano, Fee and Sons for their caring and help, and lastly the LTC for their support and love. We are blessed to live in a caring and loving community with many supportive friends and relatives. Sherry, Doyle, Michelle, Stephanie, Bradley and Cody.

Share Your Memory of
Helen
Upload Your Memory View All Memories
Be the first to upload a memory!
Share A Memory