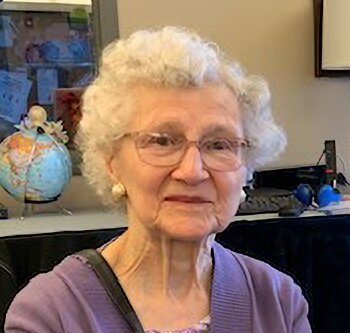 Please share a memory of Evelyn to include in a keepsake book for family and friends.
View Tribute Book
It is with great sadness that we announce the passing of Evelyn Kueber on March 6th, 2022 in Killam, Alberta, at the age of 91. Evelyn Marianna Kueber (Milani) was born on August 9th, 1930, in Edmonton, Alberta to Giovanni and Maria Milani, she was the eldest of two children. Evelyn was raised in Edmonton and spent time in Fairview, Alberta teaching prior to moving to Killam in 1955 to teach at the Killam Catholic school. Evelyn met Ed Kueber shortly after and they married on July 16th, 1957, at which point they bought land and built a home 6 miles south of Killam, where they started a family and began farming. Evelyn and Ed were blessed to have 13 children over the course of spending 37 years on the farm, before retiring and moving into the town of Killam in 1994. Evelyn enjoyed volunteering and dedicated much of her life supporting numerous local causes within the Town of Killam, including volunteering at the Auxiliary hospital, Killam Senior's Center and St. Joseph's Catholic Church. Evelyn also enjoyed watching curling, baking, doing puzzles, playing cards/games, and spending time with her friends and family, of whom she loved dearly. Evelyn was an incredibly good natured, selfless, devoted, thoughtful and kind person who made a positive impact on the lives of so many in her community over the years. She was a dedicated family woman who loved hosting large gatherings for her family, always ensuring that family was at the heart of everything in her life. She was a bright, shining light and a gift to us all. She will be greatly missed by all those whose lives she touched over the years. She was predeceased by her parents, Giovanni and Maria, her husband Ed, sisters-in-law Gen, Agnes, Eileen (Iky), and Margaret (Mag), and brother-in-law James (Jim). Evelyn is survived by her 13 children: Joe (and Trudy) Kueber, Mary (and Bruce) Thomas, Frank Kueber, Ed Jr. (and Marina) Kueber, Virginia Kueber, David Kueber, Daniel (and Bonnie) Kueber, Terry (and Marni) Kueber, Chris (and Rob) Giles, Cathy Kueber, Susan (and Louis) Schmutz, Jennifer Kueber, and Paul Kueber, as well as their 17 grandchildren: Justin and Melissa Kueber (Joe), Angela, Vanessa and Jeff Thomas (Mary), Brandi and Brett Kueber (Frank), Jaime and Erik Kueber (Ed Jr.), Brandon Kueber (Virginia), Megan Kueber, Alysha and Shelby Gartner (Daniel), Aaron Foreman (Terry), Ryan and Shayna Giles (Chris), and Alex Schmutz (Susan), as well as five great-grandchildren: Kennedy and Adrianna Foy (Alysha), and Averie Himmelspek, Eleanor and Atticus Foreman (Aaron). Evelyn is also survived by her brother Jim, and sisters-in-law Virgie, Marilyn and Betty, and her brother-in-law, Ernie, as well as numerous nieces, nephews, cousins, and other extended family. Funeral services will be held at 11:30 am on Saturday, March 12th at St. Joseph's Catholic Church in Killam, Alberta. Interment will follow at the Killam cemetery, with a light lunch and gathering of family and friends afterwards (in church basement). Memorial donations in memory of Evelyn may be made to the Alberta Cancer Foundation, The Lung Association or St. Joseph’s Catholic Church in Killam (for church basement renovations).

Share Your Memory of
Evelyn
Upload Your Memory View All Memories
Be the first to upload a memory!
Share A Memory