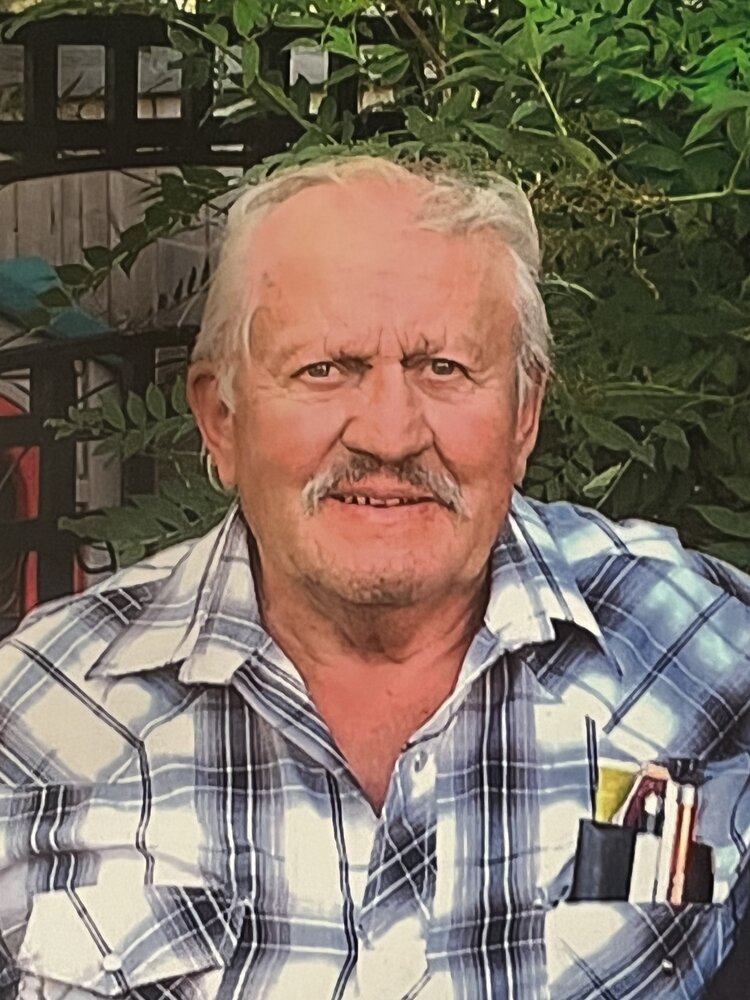 Harold Dubitz born July 25, 1942, in Stettler, Alberta hospital (Bashaw) passed away suddenly December 7, 2021 in Daysland Hospital at the age of 79 years. Harold was born to Louis and Mary Dubitz, he was the 10th child of 15 brothers and sisters, they were a large Hungarian family in the Bashaw area. The family was very musical and Harold enjoyed playing guitar and singing with his family often imitating Elvis Presley. In Harold’s early years he enjoyed his motorbikes and had a 1951 Ford nicknamed Thunder Road. As a young man Harold travelled to Tillsonburg, Ontario where his aunt Annie and Uncle Louie owned Tobacco fields and worked for them. Harold said that was the hardest job he ever encountered. After his time in Ontario, he travelled back to Alberta and went to work on the oilrigs until retirement. In 1967 Harold met Anne Martin from Forestburg, AB and in October 1968 were married. From their marriage two kids were born Kelly-Anne and Scotty. Harold loved his kids and family, they enjoyed camping and travelling to his sister’s home in BC every summer. Adventures were always had as Terry and Jim loved touring the family around. Harold enjoyed spending time with his family when the kids were young as worked away from home most of the time. Harold was a jack of all trades and full of knowledge if any vehicles needed to be fixed or even plumbing needed to be done, he was on it and usually had all the parts in the garage to do it. Harold loved going to auction sales, garage sales and was a collector of many treasures. Harold was also a big lover of animals he had many dogs and cats that he loved dearly. Harold kids were than married Kelly-Anne (Bill) Mrazek and Scotty (Robin Dietz). From the marriages Harold’s grandkids were born Sarah, Cassidy and William Mrazek and Brock, Nash Dubitz. His grandchildren were the apple of his eye and he would do anything for them. Harold would always be happy to go to the grandkids sporting event, dance recitals and taking them fishing which probably one of his favorite activities. Harold had many loves in life and he was very proud the day he bought his Harley, he also bought Anne a bike and enjoyed trips around Alberta with his brother and sister-in-law Ron and Eilene. Harold often gave Anne the gears for lagging behind on many occasions. Anne and Harold enjoyed all things that retirement brought going fishing, ice fishing and gardening. Harold was very proud of his apple trees and garden, it seemed like every year the garden was expanding and if anyone needed vegetables he would deliver. The last few years Harold had slowed down but was a happy man visiting with his brother Peter and Gail every Friday in Camrose for lunch. Harold also loved his cats and loved the entertainment they provide and called them his buddies. Harold also held his brothers and sisters in high regard texting and sending pictures back and forth, Harold took it especially hard in the past 5 years as many sisters had passed away and found it hard with each passing. Harold’s passing was unexpected by his family and he was loved dearly by them and will be missed by all. Harold was predeceased by his mother and father Mary and Louis Dubitz, siblings Helen, Patricia, Lloyd, Patrick, John, Mary, Grace (Terry), Rosalyn, Genevieve, and Tommy. Harold is survived by his loving wife Anne Dubitz of 53 years of Forestburg, daughter Kelly-Anne (Bill) Mrazek grandchildren Sarah, Cassidy and William Mrazek of Forestburg. Son Scotty (Robin) Dubitz grandchildren Brock and Nash Dubitz of Ponoka. Siblings Gib (Gail) Dubitz of Bashaw, Peter (Gail) Dubitz of Ryley, Lorna (Gary)Neuman of Airdrie and Rachel (Ken) Thomas of Pigeon Lake. Sister and Brother in laws Eilene (Ron) Damburger of Daysland, Linda (Bob) Brown of Katy Texas, Donna (Brian) Nolan of Edmonton. Harold is also survived by many nieces and nephews and friends who loved him. As to Harolds wishes no service will be held at this time and Memorial donations can be made to the charity of the donor’s choice. The family would like to thank the local EMS and Daysland hospital staff for their efforts on that day.

Share Your Memory of
Harold
Upload Your Memory View All Memories
Be the first to upload a memory!