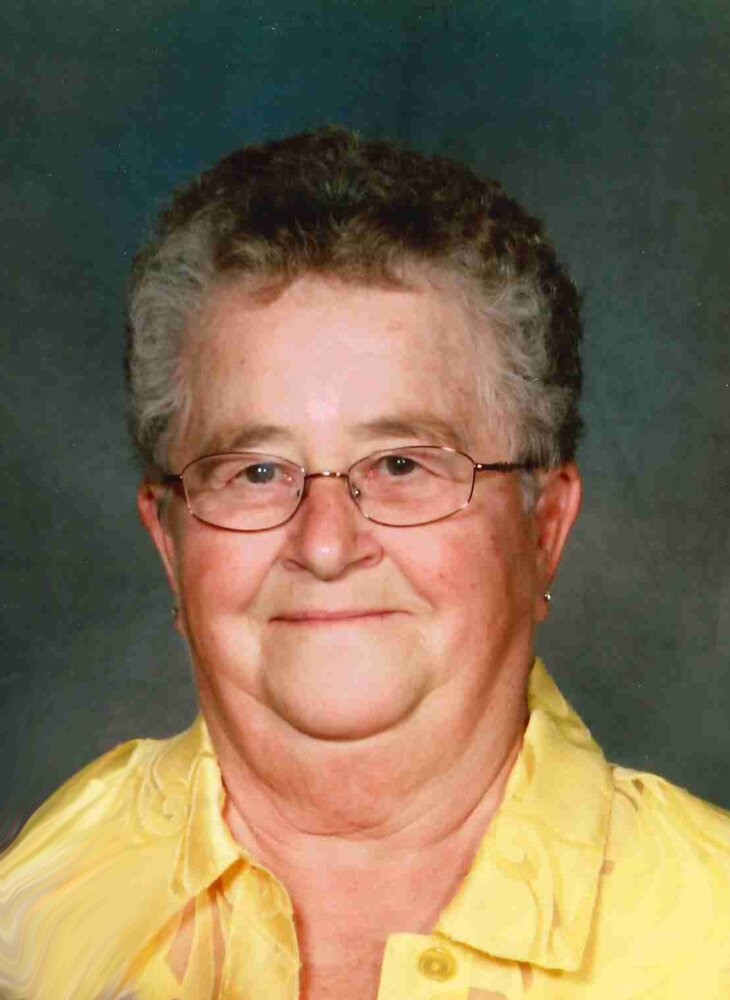 Eileen Ann Birkjar was born to Katie and Paul Gamroth on March 30, 1941 in Galahad. Eileen passed away peacefully in her sleep at Killam Long Term Care on November 26, 2021. Eileen is survived by her loving husband of 47 years, Aksel; three sons, Grant, Brent and Jay (Pata); one daughter, Joanne (Kevin); 12 grandchildren, Kaj, Lane, Taylor, Brianna, Kayla, Nicholas, Kyle, Jordan, Sheldon, Autumn, April and Samantha; nine great grandchildren, Conner, Mckinley, Avery, Emery, Turner, Colson, Tate, Sydney and Nixon; one sister, Doreen; one brother, Ernie; numerous brother/sister-in-laws; and a multitude of nieces and nephews. Eileen was predeceased by her first husband, Leander; her sons Joseph and Lloyd; her daughter-in-law, Jane; one grandson, Devon; one brother, Arnold; and numerous extended family members and loved ones. Mom took great pride in being a farmer's wife and a mother to six children. Her three favourite places were the kitchen, the garden and the sewing room. But then again, with a family of six, these were everyday necessities! Mom loved baking and cooking and was famous for her fresh bread and buns. A favourite memory is getting off the school bus at the end of the day and smelling fresh bread baking - knowing that it was our after school snack. It was an extra special treat when mom allowed us to put Rogers Corn Syrup on the warm buns... the best! Over the years as grandchildren started coming along, grandma was sure to have their favourite baking treat waiting in the freezer for any unexpected visit. To this day, it's a major disappointment if Grandma's cherry cheesecake does not appear on the table at Christmas dinner. Mom's flower and vegetable gardens occupied many hours during the summer and fall, along with fruit trees, raspberry/strawberry patches and wild saskatoon bushes (which she scouted out every spring to see which patches had the most blooms). Late summer/early fall was spent in the kitchen canning and freezing fresh vegetables, pickling, making relish, making jam with all the berries, and canning case upon case of B.C. cherries, peaches and pears. Her rhubarb patch was also large enough to feed the entire County of Flagstaff, and often did so. Mom's sewing room was always a hub of activity. Along with the continual pile of patching and mending to do, there was usually a patchwork quilt or blue jean blanket on the go. And beside mom's chair in the living room sat a basket of yarn which churned out an endless supply of alfagan blankets. Every grand baby that came along had a baby alfagan waiting for them, then a patchwork quilt, a blue jean blanket, a quillow and then a full size alfagan as they grew. Somehow in the middle of all this, mom was an active participant in the farm. She raised chickens and turkeys to fill the freezers of many, she sold farm eggs and fresh cream to a handful of customers, drove the grain trucks, moved augers, chased cattle, hauled bales, and still managed to get supper out to the field on time. Mom's life was not always full of joy. She lost many that were precious to her, yet she always found the strength to face another day and another challenge. She was known as a pillar of strength to many. Mom spent the last 20 months in Killam Long Term Care. She often said "its not home on the farm, but it's the best next thing". During her time there, mom won over the hearts of many of the staff members who fell in love with her too. Mom's last couple of days saw many staff members coming to sit with her, hold her hand and say their goodbyes. They had become a family too. Due to the COVID-19 restrictions, a private family service will be held. Memorial donations in memory of Eileen may be made to Killam Long Term Care or a charity of the donor's choice.

Share Your Memory of
Eileen
Upload Your Memory View All Memories
Be the first to upload a memory!
Share A Memory