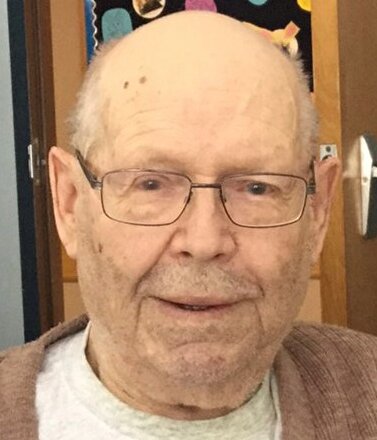 Please share a memory of Lon to include in a keepsake book for family and friends.
View Tribute Book
Lon Richard Chilson 1933-2021 Anyone that knew Lon would know he loved to tell a story. That story might take him all day to get through but eventually he said what he had to say. So that brings me to this! As I was writing I kept on procrastinating on what to say. Why was this taking so long to put on paper. Maybe this is how long it was suppose to take. Maybe it's just a resemblance of how Lon would have told it. So here it goes. Lon's last story. Lon Richard was born to Bud and Ruby Chilson in Rockglen, Saskatchewan on December 11, 1933 and passed away on October 28, 2021 in the Hardisty Long Term Care at the age of 87. He was predeceased by his parents Bud and Ruby, brothers Earl and Gordon and sisters Della, Dorothy and Lavina. He leaves to mourn his loving partner Linda Pellern of 18 years, his 3 children; Brenda, Kathy and Mark, 7 grandchildren, 6 geat-grandchildren, nieces, nephews and Linda's girls (Lon's extended family) Tracy, Karen, Penny, Cheryl, Amanda and families as well as many friends through the years. In Lon's younger years he was quite the sports athlete. In winter he enjoyed playing hockey and curling at the rinks. During the summer you could see him running the bases at the local ball diamonds. He also enjoyed a few trips to B.C. and into the United States. Lon attended an agriculture school in Moose Jaw and maintained a mechanics certificate. He owned and operated a Ranch at Rockglen for many years. After selling the ranch he continued to haul grain and cattle in Alberta and into Saskatchewan and Manitoba. Lon met Linda while they were both living in the Hardisty Manor in 2003. In 2005 Linda bought a house in town and Lon joined her. This is where he resided until moving into the Hardisty Long Term Care in September of 2019. Lon loved to work with his hands. You could always catch him tinkering in the shop. He was either fixing something that had broke such as the wheel barrel that needed a new wheel/handle or something new such as the storage shed in the back yard or the lean to over the deck. If he couldn't build it he was always willing to buy it, especially if it brought a smile to someones face. He was that kind of guy. He would do anything for anyone. Summers were his favourite. He loved when you could sit around the fire visiting and roasting hot dogs. If he wasn't by the fire pit he would be on the deck making homemade french fries for the whole crew. Again, smiles and full bellies made him happy. Linda would get a break from cooking most every week as Lon loved his soups. He would be in the kitchen for hours chopping up fresh veggies for the big pot on the stove. Hours it would take as one would go to the pot and one to him. He sure enjoyed his fresh veggies. Fresh fruit from the fruit truck was another favourite and was never short a jar of pickles, whether it be dills, onions or olives you could always find one on the counter for munching. December comes along and Lon and Linda would turn into the Griswalds. The house and yard would be little up like Candy Cane Lane. You could bet that Lon would get a new addition every year. He enjoyed the lights, inside and out. Lon would have a story for everything. If someone would listen you could be there for hours. He loved to tell stories of the old days and his experiences. Lots reverted back to Rockglen, the farm/ranch or even crazy foods he had eaten like skunk. He was a simple man who genuinely cared about those around him. He was loving partner to Linda, caring Dad, Grandpa and Uncle. As per Lon's wishes there will be no service. He will be buried at Rockglen, Saskatchewan beside his Mom and Dad. Linda and families would like to Thank Dr. Ivare and the staff at the Hardisty Long Term Care for all they did for Lon during his stay and in his final days/hours.

Share Your Memory of
Lon
Upload Your Memory View All Memories
Be the first to upload a memory!
Share A Memory