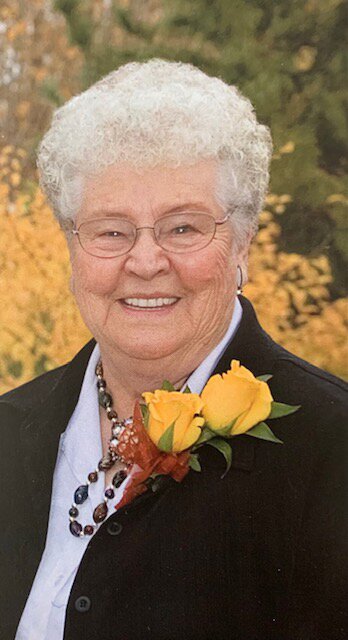 Please share a memory of Adelaide to include in a keepsake book for family and friends.
View Tribute Book
Adelaide was born on December 29,1925 in Brandt, South Dakota to Oscar and Julia Reitan and passed away peacefully on September 26, 2021 in Edmonton Alberta at the age of 95. Two years after her mom passed away Adelaide moved with her grandparents, father and younger sister Olive to the Irma district when she was four years old. She later met and married Reginald McClements in the Sharon Lutheran Church near Irma, Alberta. The first winter that they were married they worked in Edmonton at the Pankiw Dairy. Dad delivering milk in the city and mom cooking for the hired hands. Later dad worked for the Arctic ice company cutting ice on the North Saskatchewan and mom worked at the Colonel Mewburn Hospital as a nurse’s aide, looking after the wounded veterans. In the spring of 1946, they returned to farm northeast of Lougheed. There their four children were born and raised and mom and dad resided there until they retired to Sedgewick in 1985. Mom and dad ran a mixed farming operation and times were very tough but the one thing that they both knew how to do was work and work they did. Mom helped with all the outside work as well as keeping up the housework. She had two very large gardens and between cooking, and canning and baking and cleaning she did the work of two people. She was well known for her baking skills and her cinnamon rolls, buns, butter horns and flapper pies were next to none. Mom and dad were involved in both the communities of Lougheed and Hardisty in various aspects due to the fact that they lived practically the same distance from both communities. They were members of the Hardisty United Church and mom at one time was president of the UCW. Mom was also a long-time member and president of the Hazelwood Good Deed Club as well as being a member of the Rebekah Lodge for eleven years holding the position of Noble Grand. Music was a huge part of mom’s life and her and dad spent many enjoyable evenings dancing the night away at Melbrae, Groveland, and Lougheed community halls. She also played the piano, accordion and guitar by ear and made sure that her love of music was passed on to her children. Mom was a very sociable person. She loved visiting with people and entertaining. She loved it when people stopped in for coﬀee and a chat and it gave her a wonderful sense of self-worth if she could make people happy. She also had a great sense of humour and a great zest for life but her greatest love of all was her love of family. She left us with a great legacy and she will be forever missed and cherished by her family. Adelaide is survived by her four children: Karen (Walter) Genesis; Marlene (Lehman) Thompson; Calvin (Arlene) McClements; Joy (Merlin) Arntzen and her grandchildren along with her great grandchildren: Brent (Heather) Genesis, Ezra, Hannah and Abigail; Garth (Amy) Genesis, Tieg and Aspen; Chandra Bailey; Mandy Bailey; Shari (John) Bailey Richardson; Sheena (Paul) Edginton, Ethan, Vance; Scott (Kandace) McClements, Jaxon, Jett; Dean Arntzen and girlfriend Kim; Trena (Jon) Taralson, Grace Adelaide, Jacob, Zoey; Along with nephew Daren (Betty) Lien She was predeceased by her husband Reginald in 1997, her sister Olive Lien, brother-in-law Alfred Lien, her nieces Sharon Lien and Carolyn Hartung; her brothers-in-law James and Lesley McClements and their wives as well as her sister-in-law Olive Barber and her husband. Due to the Alberta Health restrictions, a private family service will be held.

Share Your Memory of
Adelaide
Upload Your Memory View All Memories
Be the first to upload a memory!
Share A Memory