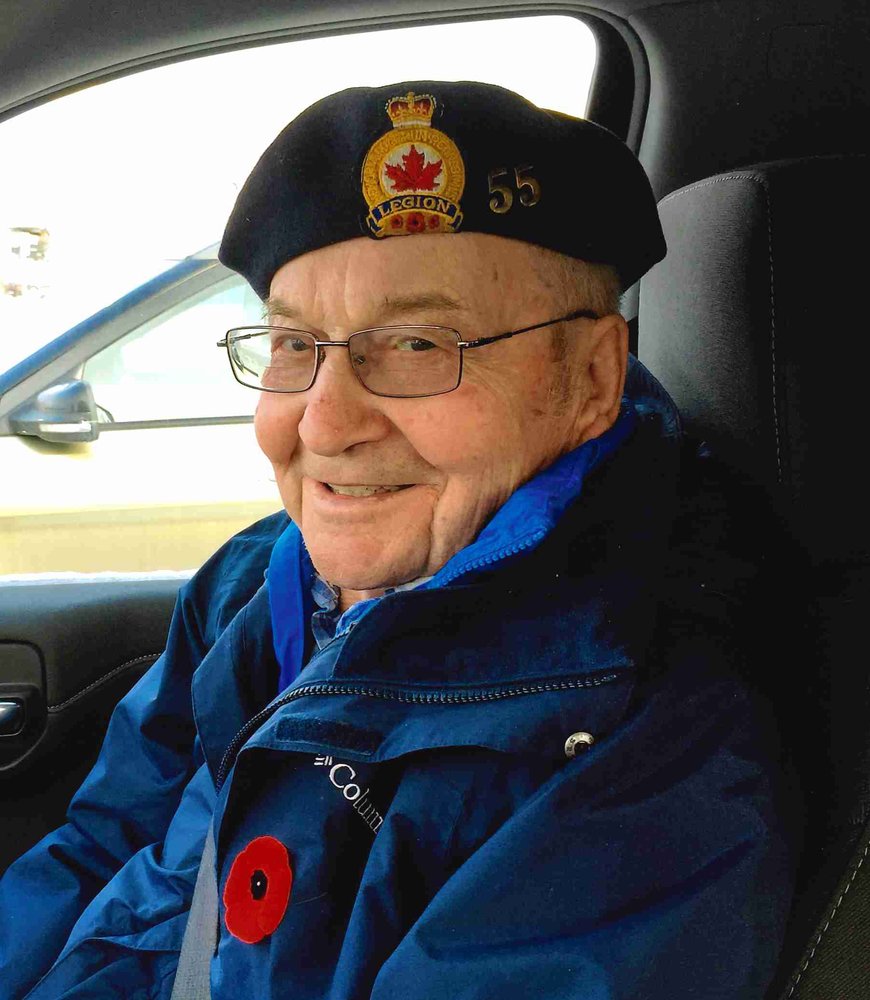 Please share a memory of Grant to include in a keepsake book for family and friends.
View Tribute Book
Grant Anderson Cheram was born to Olaf and Jane Cheram on July 2nd, 1926, in Hardisty, Alberta. He passed away peacefully on July 7th, 2021. Grant was raised in the North Rosyth district, along with his four siblings: Andrew, Elizabeth, Keith, and his twin, Gordon. He attended the North Rosyth School, the Fullview School north of the Battle River and the high school in Hardisty. Dad told us many stories over the years about life on the farm in the Thirties. He and his siblings spent a lot of time swimming in the Battle River, and basically lived on fish, so he never really liked fish for dinner in his later years. Grant served in the Royal Canadian Navy near the end of WWII, enlisting at the age of 17. After the war, he worked at the NADP in Sedgewick, later becoming the manager of the NADP in Hay Lakes. A few years later he moved back to Sedgewick to manage the creamery, and there he met his future wife, Mary Innes. Grant and Mary were married on September 22, 1952. They had three children: John, Maureen, and Patricia. Throughout the years, Grant and Mary were very involved with the Sedgewick Legion, Branch 55. They met many lifelong friends and enjoyed many social activities. He was a proud Canadian veteran. In 1967, Grant changed jobs with the closure of the Sedgewick creamery, he became the Assistant Secretary Treasurer for the County of Flagstaff. In 1971, Grant and Mary purchased a farm a mile east of Sedgewick. In 1982, Grant became a full-time farmer and enjoyed many years of haying, raising cattle, pigs, and chickens. Grant was an avid curler and golfer and really enjoyed goose hunting with his many hunting buddies. The family also enjoyed yearly vacations out to B.C camping. In later years, Grant enjoyed gardening, bridge, and helping out around the farm. He purchased a motor home in 1987, and once again, went on yearly trips to the Okanagan. There were many other cruises and trips with his family. Grant passed away peacefully on July 7th, 2021. Grant enjoyed a good, long life filled with hard work, many friends, and good health. He will be remembered for his kindness, generosity, and his great sense of humour. He is predeceased by his wife of 66 years, Mary, his parents, all of his siblings, and his daughter-in-law, Betty. He leaves to mourn his loss, his son, John (Cheryl), and his daughters, Maureen and Patricia. Also, his grandchildren and great-grandchildren: Tracy (Tony) Lindseth, and their children Parker (Beckie), and Hanna; Todd and his children, Ryder, and Taylan, and their mother, Erika; Heather (Elton), and their children, Boston and Billiana; Brad (Marcie), and their children Dukey, and Sammy; Kelly (Chris), and her children, Raya (Mark), and Korbyn; Julie (Chris) and their daughter, Gabrielle; Mitch (Jamie). If desired, donations may be made to the Sedgewick Cemetery Fund or the charity of one's choice. A private family service will be held.

Share Your Memory of
Grant
Upload Your Memory View All Memories
Be the first to upload a memory!
Share A Memory