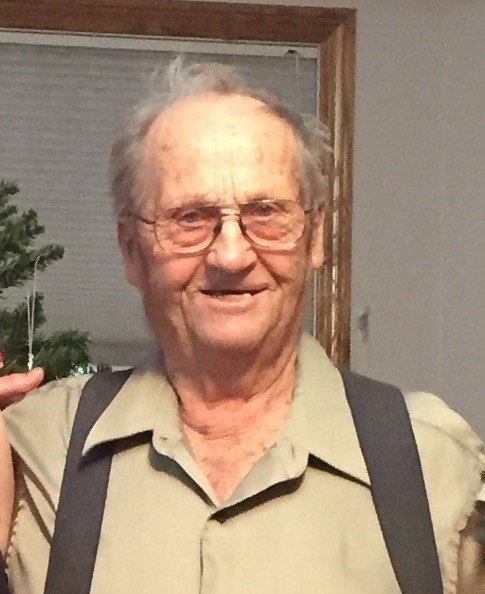 Please share a memory of Robert to include in a keepsake book for family and friends.
View Tribute Book
Robert Jensen of Forestburg passed away peacefully, at the age of 87, on June 26, 2021 at Daysland Hospital as a result of a brain hemorrhage. Robert was born at home on January 18, 1934 near Lindbrook, Alberta to his parents Aage and Gerda (Hansen) Jensen, who had immigrated from Denmark. He had two older siblings- sister Vera (Laurie) Lonneberg, and brother Harry. He began school at Lindbrook, learning English during his first year. The family moved to the farm at Dickson in 1942, when Robert was 8 years old. He was proud to have completed grade 10. After school, he spent some time working on oil rigs, and then came home to work on the farm, which was his life’s work and passion. He was very proud to be able to say that he farmed for 50 years on the same place! Robert was introduced to the love of his life, Barbara and they married, in Salt Lake City, Utah in 1970. They had one daughter, Deanna, who they raised on the farm. Robert sold the farm and retired with Barbara in 1993 to the Cottonwood area, west of Innisfail. In 2007 they moved to Daysland to be closer to their grandkids. Robert moved into Big Knife Villa (Forestburg) in 2019. Robert was involved in the Dickson Fish and Game Association for many years and was an avid snowmobiler. He enjoyed going to the back country with snowmobiles, motorbikes, horses, and quads. These adventures continued into retirement along with travel to several dream locations. After retiring, Robert discovered a passion for woodworking and created many varied projects, from bowls to planters, and even some furniture. He was especially proud of the toy trucks he made for his grandsons and how they were strong enough to be ridden and played with by rough farm boys! He also had a thriving firewood business at his acreage at Cottonwood and loved visiting with every one of his customers and delivering wood to local campgrounds. This fit his very social nature and he made several good friends along the way. The Cottonwood community had a special place in his heart and he talked about these friends often. He made friends wherever he went and also had some very special people in his life at Daysland and in the Villa. He will always be known for his generous, kind heart. Robert is survived by his wife, Barbara, daughter, Deanna (Roger), 2 grandchildren (Chance, Adam), 2 nieces and 3 nephews, plus numerous siblings-in-law and nieces and nephews in his wife’s family. He was predeceased by his parents (Aage and Gerda), sister (Vera), and brother (Harry). A memorial service will be held at the Knox United Church, Killam on Saturday, July 10, 2021 at 2:00 p.m. The family is encouraging everyone to social distancing and wearing of masks. In lieu of flowers, donations may be made to the Cottonwood Ag Society, Big Knife Villa Auxiliary, Galahad Care Centre Auxiliary, or the charity of the donor’s choice.

Share Your Memory of
Robert
Upload Your Memory View All Memories
Be the first to upload a memory!
Share A Memory